Trending
You are at:Home»More»Toke Makinwa Reveals She Made a Sex Tape With Husband, Ayida 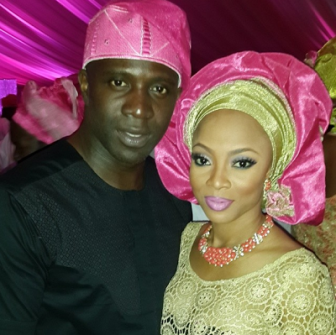 Excerpts from Toke Makinwa ’s upcoming book “Becoming” have begin to hit the web. One of the biggest revelations in the book was Toke revealing her husband has called off their wedding 3 times previously as well as the fact that they made a sex tape together.

She wrote in the book, “It was my wedding day. I was happy, yet I was waiting for something to happen. Maje had disappointed me three times before. We would pick a date to go to the wedding registry and he would call it off. It wasn’t until we shared our first dance that I finally believed that it had happened. .

We got back together (after a quarrel because Maje took ‘an ex’ to a party he bluntly told Toke he wasn’t taking her to and he and the ex were ‘touching freely and kissing’) Maje invited me to Abuja. As I was putting away my things I saw all kinds of feminine items – earrings on the dresser, sanitary pads in the drawer….”

“At some point while we were dating, Maje had asked if he could tape us having sex. This was a new one for me but I would do anything to keep my man, or so I thought, and so I obliged. But I was nervous afterwards because I didn’t want the tape to get into the wrong hands.

I dragged the file back to his desktop, and I could tell from the stilled image in the video that the person in it was not me. I clicked play and watched horrified as Maje had sex with Anita. Watching that video, all of the inadequacies I thought I had dealt with over the years came rushing back.