Wife to Legendary musician, 2face Idibia, Annie has been accused of brutally attacking her brother Wisdon’s fiancee, identified as Doris.

According to the video made available by IB9ja, the alleged fiancee is seen narrating what led to the said altercation, and how Annie and her mum stormed her home to violently attack her.

“Annie Idibia’s brother Wisdom has been my fiance for four years and I have given him two kids. I told him to come and do my bride price and he refused,” she began, adding that anytime she raises her mother’s discomfort with their relationship, Wisdom would storm out of the house.

“He smokes a lot [of] Indian hemp. Any little thing, he would beat,” said Doris who added that she was makeup artist before the mess her life has become. “That was how [Wisdom] met me. I was doing well.”

The mum of two went on to add that she was stopped from working, hence she is unable to support herself. “They don’t want me to work. Annie Idibia doesn’t want to help me. She doesn’t want to care about me. And their mum, too.”

Adding that, each time she had minor a altercation with Wisdom, he would bring in Annie and his mum to wreak havoc in her home. 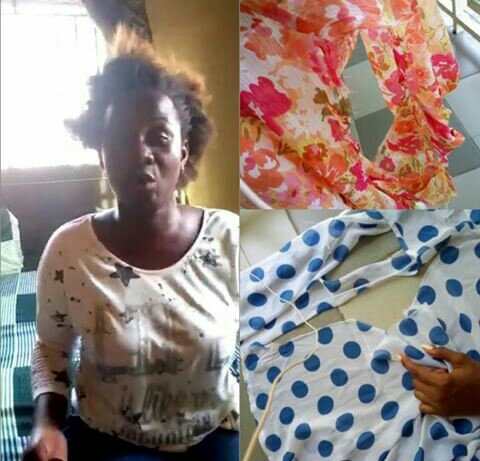 “Next thing, Annie and her mum would come in her Prado [to cause trouble]“, (referencing the disarray in her home, her disfigured finger), she continued, “Look at my hand, they broke this hand on my son’s birthday. Any small thing, just like today, they would beat me.”

She continued, telling how Annie and her family ‘abducted’ her son.

The abused woman revealed that she was a comfortable make-up artiste before she met her fiance who seemed to have abandoned her without support. Her raggedy state can be perceived as a testament of her claim.

She is however not so keen about getting hitched to Macauley. Her preferred response will be for him to take responsibility of her and the children she bore in their years of living together.

Annie Idibia is yet to offer a comment concerning the allegations laid against her and family.

Social media users on Instagram were of the opinion that Doris plea for attention and claim of assault was an attempt to smear the reputation of the family.

That remains a subject for confirmation in a domestic violence case that has plagued some celebrities in the year 2017. Actresses Tonto Dikeh and Mercy Aigbe, are prominent examples, leading them to separate from their partners after so much debate concerning the authenticity of their assertion.

Watch the video below;