A family has been left in serious shock after a 10ft-long python emerged from under boy’s bed after killing the family pet.

A terrifying footage has shown the moment a deadly snake was uncovered hiding beneath a young boy’s bed – after killing the family pet.

According to Daily Star UK, Thanapoom Lekyen, 42, was shocked to find her lifeless cat with a series of bite wounds outside her 13-year-old son Nong’s bedroom.

She then entered his room, but fled in terror after spotting the animal’s shiny scales below the mattress.

“I knew there was a problem and I shivered and my stomach was feeling sick,” she said.

“I was scared. I looked in my son’s bedroom and screamed when I saw something moving under the bed.”

Luckily, the youngster had slept in his mum’s room the night before.

Thanapoom added: “If he was sleeping in the bed, he’s only small and it could have killed him.” 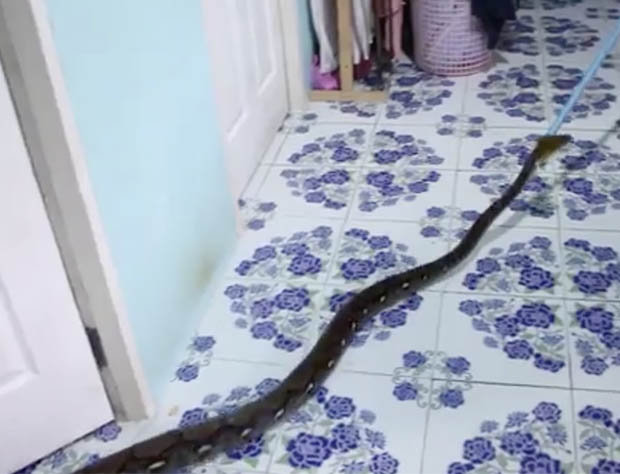 In video taken soon after the discovery, Nattapon Boonmee – from a local animal rescue centre – is seen trying to drag the python out of its hiding place.

After several attempts he manages to get hold of its head before pulling it through the hall.

The animal expert was left bleeding after his ordeal with the “very aggressive” snake.

He added: “A more powerful bite would be very, very dangerous.”

Rescuers were able to release the snake back into the wild unharmed, near the family’s home in Chaochoengsao, Thailand.