A 49 year old Arkansas man has been arrested and charged with bestiality after police say he was recorded on surveillance camera repeatedly having $ex with a family’s pet donkey.

The man, whose name was given as Everett Lee Compton, was arrested and taken into custody after Emert and Joyce Whitaker called 911 to report that a stranger was on their Siloam Springs property engaging in $exual activity with one of their two female donkeys.

Cops found the suspect hiding in nearby bushes on July 17 after the pair noticed him in the acts on their cameras.

When asked what he was doing on the Whitaker family’s property in the 1600 block of Cheri Whitlock Street, Compton initially said he was just taking a late-night stroll and decided to feed the donkeys some carrots, according to an arrest affidavit cited by the station KHBS.

The cop then informed the suspected trespasser that there were surveillance cameras installed on the property and that he was planning to review the footage.

That is when Compton admitted to $exual contact with the donkey and blamed the acts on his marijuana habit, which he said has been making him do ‘sick things,’ according to the affidavit.

The Whitakers have recently installed game cameras on their land after repeatedly finding evidence that someone had been coming onto their property and harassing their animals at night over the past three years, reported the Northwest Arkansas Democrat Gazette. 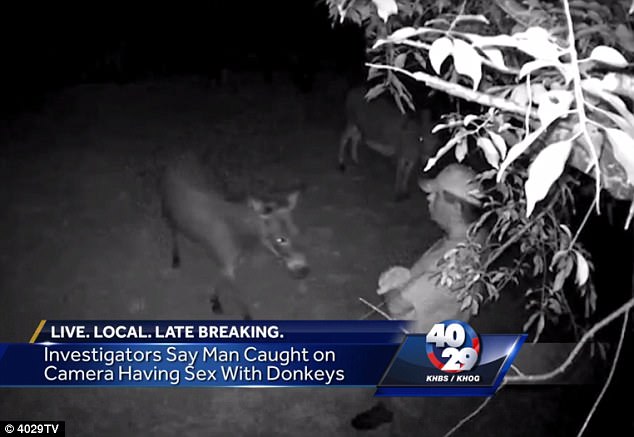 On three separate occasions, in May, June and early July, the cameras caught a man, believed to be Compton, feeding the Whitakers’ donkeys bread, then covering their eyes with a shirt, standing behind them and pressing his pelvis against the animals’ rear, according to the document.

The family had turned all the photos over to police and posted ‘No Trespassing’ and ‘No Feeding’ signs on their property.

Then at around 1.30am on July 16, when Whitakers noticed that someone once again entered the donkeys’ enclosure, they called police to come and arrest the suspect.

Compton promised the officer to seek professional help if he did not charge him with bestiality, but his pleas fell on deaf ears.

One of the Whitakers’ pet donkeys was pregnant at the time of the incidents and ended up losing its foal, which the owners have attributed to the $exual abuse allegedly inflicted by Compton.

The 49-year-old man is due back in court for his arraignment on September 11.