Singer Mr Eazi has been faced with several controversies this year, so much controversy that we might get you bored if we start highlighting them.

Part of them is the criticism that he does not have a lovely skin,even though he’s making money through his music career and is dating one of the daughters of Billionaire oil mogul, Femi Otedola.

The Starboy singer has then revealed his case is Spiritual, Mr Eazi in response to the criticism of not having a good skin despite said:

“Mr Eazi no get money o! Even if him get sef, e own na spiritual case,” the singer said as he made fun of himself 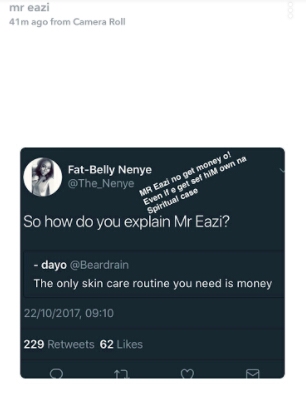